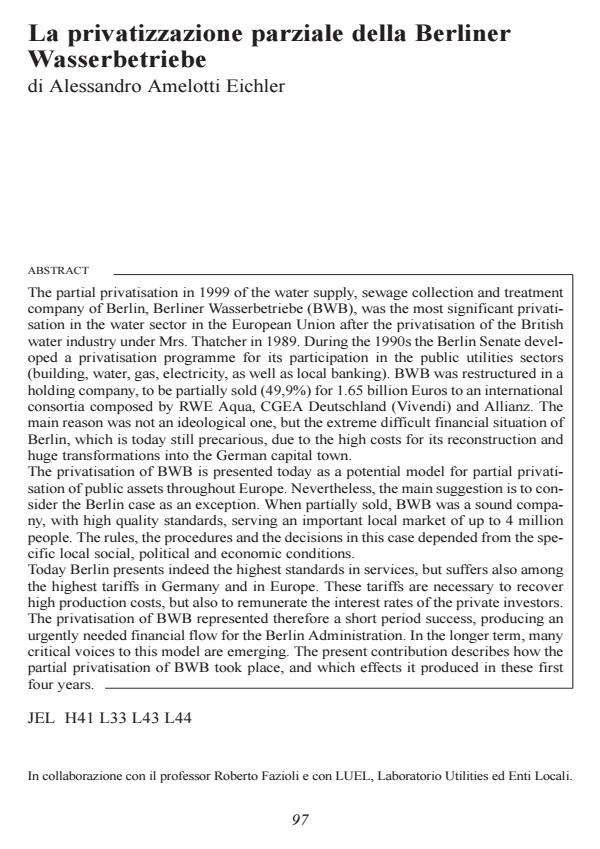 The partial privatisation in 1999 of the water supply, sewage collection and treatment company of Berlin, Berliner Wasserbetriebe (BWB), was the most significant privatisation in the water sector in the European Union after the privatisation of the British water industry under Mrs. Thatcher in 1989. During the 1990s the Berlin Senate developed a privatisation programme for its participation in the public utilities sectors (building, water, gas, electricity, as well as local banking). BWB was restructured in a holding company, to be partially sold (49,9%) for 1.65 billion Euros to an international consortia composed by RWE Aqua, CGEA Deutschland (Vivendi) and Allianz. The main reason was not an ideological one, but the extreme difficult financial situation of Berlin, which is today still precarious, due to the high costs for its reconstruction and huge transformations into the German capital town. The privatisation of BWB is presented today as a potential model for partial privatisation of public assets throughout Europe. Nevertheless, the main suggestion is to consider the Berlin case as an exception. When partially sold, BWB was a sound company, with high quality standards, serving an important local market of up to 4 million people. The rules, the procedures and the decisions in this case depended from the specific local social, political and economic conditions. Today Berlin presents indeed the highest standards in services, but suffers also among the highest tariffs in Germany and in Europe. These tariffs are necessary to recover high production costs, but also to remunerate the interest rates of the private investors. The privatisation of BWB represented therefore a short period success, producing an urgently needed financial flow for the Berlin Administration. In the longer term, many critical voices to this model are emerging. The present contribution describes how the partial privatisation of BWB took place, and which effects it produced in these first four years.