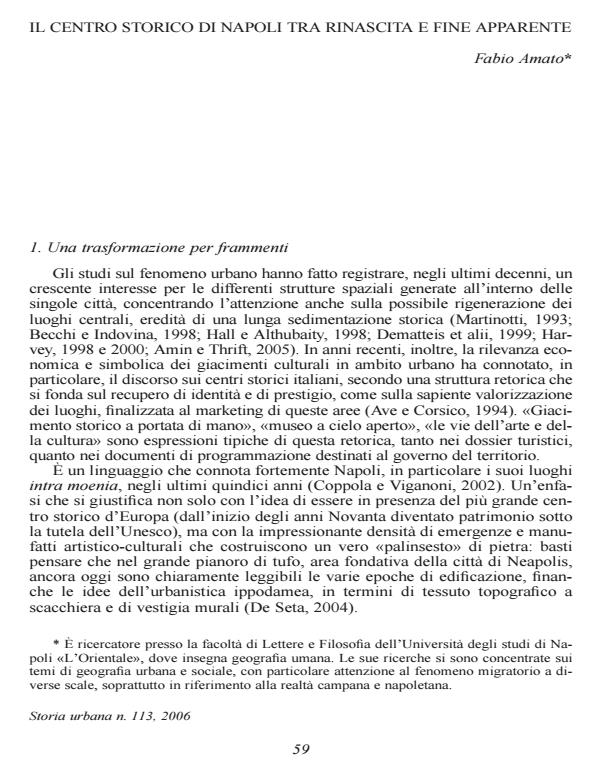 The article traces the broad outlines of the evolutionary trends that have been at work in the historic center of Naples over the last few decades. In the first thirty years of the postwar period, the city’s problems were still rooted in unhygienic, overcrowding housing, a deteriorating building stock, wildly chaotic traffic and a crime-ridden economy. The year 1980 can be seen as something of a watershed, not so much because of the abortive attempt to introduce a new master plan that was to have taken up where its predecessor left off, as because of the socio-demographic changes that took place in the historic center. Here, in fact, a gradual decrease in population was accompanied by a sharp shift in the area’s social balance, with a large proportion of its middle- and working-class inhabitants supplanted by the very wealthy and the very poor, and by non-European immigrants in particular. The Nineties were marked by urban image-building efforts that attempted to instill new life into the city, starting from its historic core. Nevertheless, the resulting flurry of activity, which ranged from the new Master Plan to investments in urban furnishing, from the crackdown on illegal activity to the Monumenti Porte Aperte initiative that reopened many of the city’s monuments to the public, and from the new public transport policy to the introduction of pedestrian zones, has now, as the URBAN program and the Siren project have also demonstrated, lost much of its momentum through a lack of effective public action.;