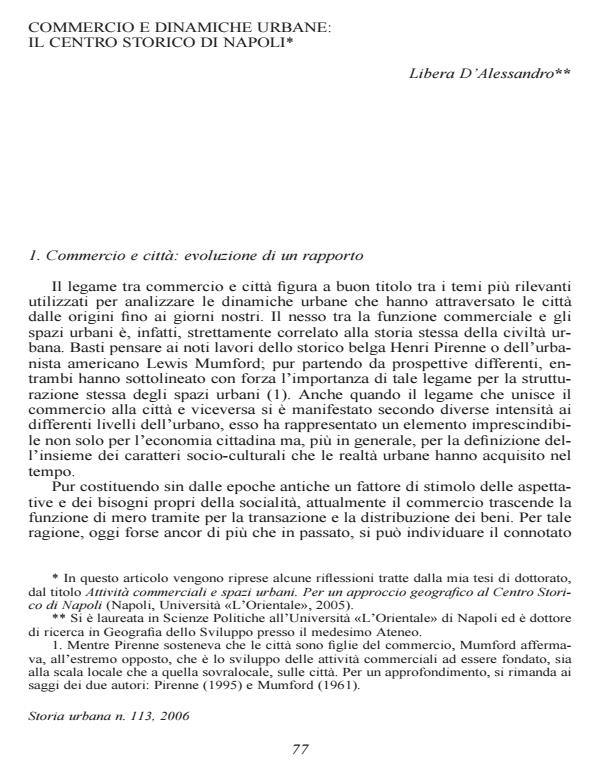 The article offers a synthesis of how the commercial landscape of Naples’ historic center has evolved: first, the changes that took place at the turn of the twentieth century; then the process of development that, from the post-World War II period to the end of the Eighties, laid the foundations of trade in the consolidated city; and, finally, the transformations that commerce has undergone in the last two decades. As early as the nineteenth century, there was a high city and a low city, matched by gradations in the social scale, with a select group of small merchants in the one, and a myriad of tiny shops and craftsmen in the other. Though commerce retained its pride of place on the Neapolitan scene after the Second World War, between the end of the Fifties and the beginning of the Sixties, the city was engulfed by a speculative boom that pushed the urban area well beyond its old boundaries. The commercial area, however, saw no change until a decade later, as the Sixties gave way to the Seventies. In the Eighties, commerce was hit by a crisis that cut deep into city’s economy as well as into the spaces traditionally given over to trade. The most significant changes in the commercial landscape of Naples’ historic center have occurred when urban dynamics overlap the sectorial dynamics of commerce. To climb out of the crisis, the more innovative enterprises were able to win back consumers by leveraging the connection between shopping and leisure, while more traditional retailers were marginalized. This is a situation that is now being replaced by a fluid, diversified commercial geography, where a post- hierarchization is superimposed on the traditional hierarchization of space. This brings us back to the relationship between city and commerce, in the sense that the bidirectional link between the two can produce effects that are as noticeable as they are new or, conversely, become weaker, contradictory and unclear.;