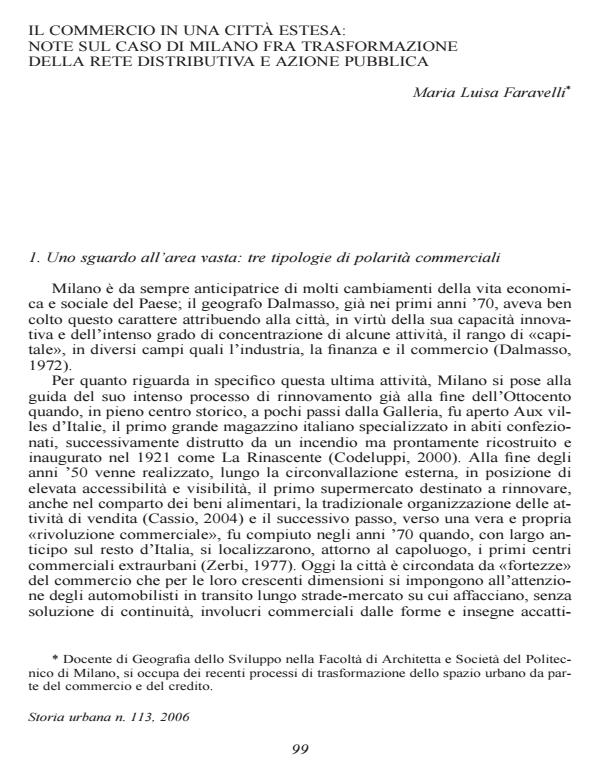 The first part of the article draws a rough sketch of the current situation, where the areas stretching westward from Milan towards the Malpensa airport are ceding their once-dominant role to the enormous new retail centers that have sprung up in thirty-five municipalities lying chiefly to the northeast and southwest of the city. This is a situation in flux, and one which should be regulated to a much greater extent than is contemplated by the provincial administration’s planners. The second part of the article is devoted to Milan, and in particular to four major processes of change that are now affecting commerce. The first of these processes is the steady spread of shopping areas that are already highly specialized: the so-called Golden Quadrilateral between Via Montenapoleone, Via Manzoni, Via della Spiga and Via Venezia, which has expanded in recent years largely as a result of the growth of designer clothing businesses, and the Canonica-Sarpi district, where the rapid growth of the Chinese community’s cut-rate textile and clothing outlets has upset an earlier equilibrium between native and non-native populations and different forms of trade. The second process arises from the failure of the radials extending outwards from the city’s hub to specialize: several of these areas, which historically provided their residents with a highly varied mix of stores, can now offer very little that is in any way out of the ordinary. The third process concerns the halting approach taken to commerce in public areas: the potential of this historic form of retail is still largely untapped, and few investments are being made to improve its organization and the range of commodities it offers. The fourth process is the return of shopping malls and other large retail outlets to the city: following in the footsteps of many European metropolises, Milan has moved ahead of other Italian cities in this respect, using disused industrial areas mostly located between the city center and the far outskirts as a resource, but seeing these new sales outlets as islands separate from their surroundings and, in some cases, as an opportunity to boost property values.;