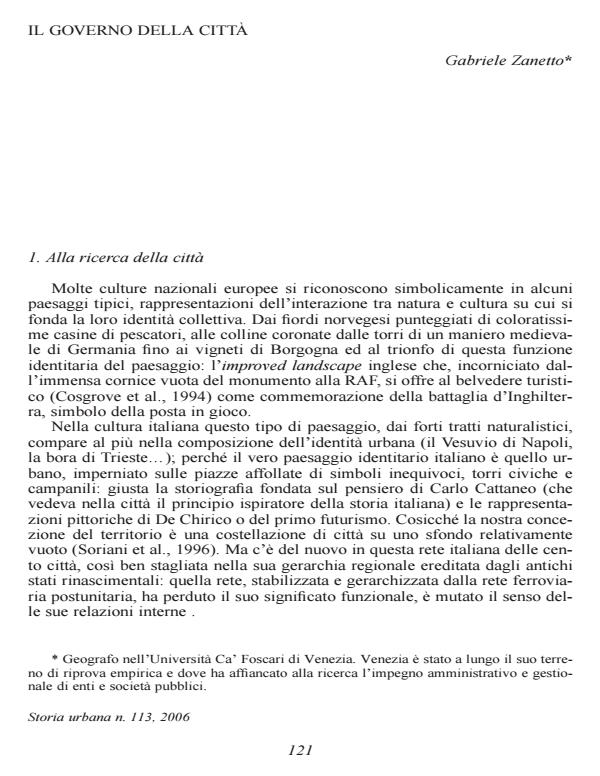 The article opens by noting that the Italian urban network, stabilized and forced into a hierarchical order by the railways, has shed its functional significance now that Italy can be seen as a much shorter series of urban apparatuses whose size puts them more on a semi-continental than a merely national scale. We must thus think of historic centers as part of an immense and multi-faceted commuter system that moves people back and forth between home, work and services. If, then, we shift our attention from the city to the actors in it, we begin to see how difficult it is to identify the communities that city government regards as its real constituency: a problem aggravated by the refusal on the part of the Italian regulatory framework and of Italian culture on the whole to accept the emergence of metropolitan structures. Commuters, students, tourists: all are a vital part of the system that tends to be excluded, just as the region around a metropolitan area must have a voice in deciding that latter’s future. The historical portions of our metropolises provide an excellent proving grounds for testing ways of dealing with these difficulties. The role of historic centers is also the result of the shift in the centrality the many centralities that they traditionally enjoyed. Consequently, much of what was once the beating urban heart of historic centers has abandoned its former haunts which, for lack of an alternative, have simply been hollowed out. The final section of the article focuses on Venice, a city that, though it has lost many of the functions that sustained it in the past, still has an urban complexity and a power of attraction that ensure its continued vitality.;