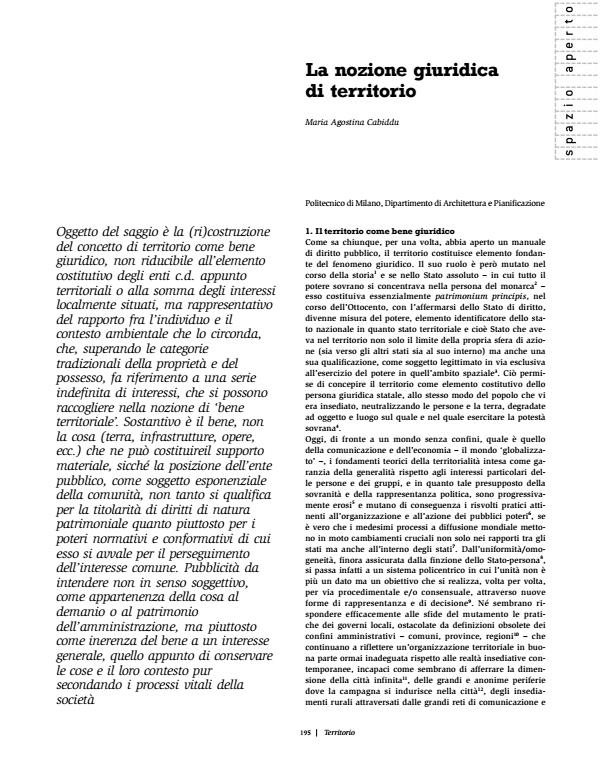 The legal notion of "territorio" - The term ‘territorio’ in Italian no longer refers necessarily to a general set of local institutions and interests, nor to what is constituted by those bodies termed ‘territorial authorities’. Rather today it alludes, even in the commonly understood meaning of the term, to a new form of relationship between 224 Territorio individuals and the environment that surrounds them and in which they perform their activities, which goes beyond traditional classifications of ownership and possession and relates to an undefined series of interests which can be encapsulated with a verbal formula which has no corresponding term in law in the strict sense in the notion of ‘territorial good/asset’ (Translators note: the noun and its adjective are seldom translated by ‘territory’, but variously by ‘community’, ‘local’, ‘geographical’, ‘land’ and so on according to the context). It is an open term subject to continuous evolution characterised by its immateriality and its public nature. This means that the substantive nature is the good and not the things (land, infrastructures, civil works, etc.) that constitute, according to the case, the material support for it, and it is therefore obvious that the position of a public authority in its quality as an exponent of the community is not so much the holder of property rights as of a holder of legislative and regulatory powers which it uses to pursue the common interest. Its public nature is therefore understood not in the subjective sense as a thing in the public domain or as belonging to a public administration, but rather as a good that is inherent to a general interest and more precisely the interest of conserving things and their context while also facilitating processes that are vital to society.;