School-level factors and student performance in the Iea studies. An example from Timss 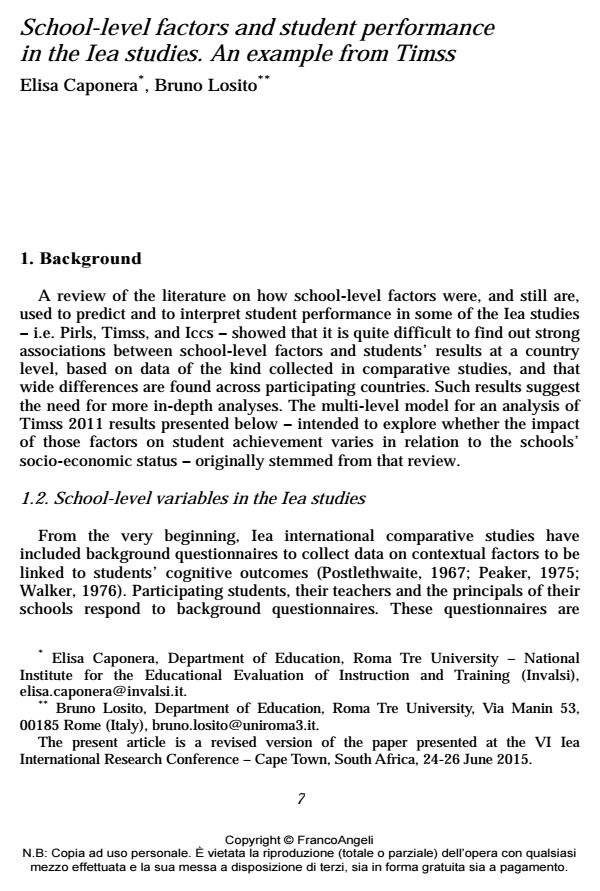 Iea international comparative studies traditionally include the use of background questionnaires. Data collected through those questionnaires are central to both international reports and secondary analyses, as they allow to better contextualize student results in the cognitive tests and help identify the school and classroom factors that have a direct or indirect impact on student performance. A systematic review of the literature on Pirls, Timss, and Iccs was conducted upstream, to identify those school, teacher, and classroom factors which are potentially useful predictors of student performance. Such a review highlighted that it is exceedingly difficult to draw causal inferences, as well as to find strong associations between process-related school variables and student achievement. The type of constructs and variables used in the questionnaire development, the way these constructs and variables are operationally defined, the self-reported nature of the collected data, and the kind of data analyses carried out all contribute to explain that difficulty. In order to verify whether the impact of specific school and teacher characteristics varies as a function of the socioeconomic status of students at the school level, a hierarchical multilevel analysis of Timss 2011 data was conducted. Data from the European countries particvipating in the survey were included in the analyses.The analysis measured what proportion of the variance was actually explained by the factors included in the model and whether the impact of the same factors varies in relation to the school socioeconomic background. A separate analysis was conducted for each considered country and the same multi-level regression model was used first on the schools as a whole, and then treating schools with high and low socioeconomic backgrounds (based on average student Ses at school level) as two distinct groups. In most countries, results showed the influence of socioeconomic status at school level for all three groups of schools - all schools, high Ses schools, and low Ses schools. Furthermore, results showed that school and teacher characteristics have different impacts across countries and in relation to school socioeconomic backgrounds.