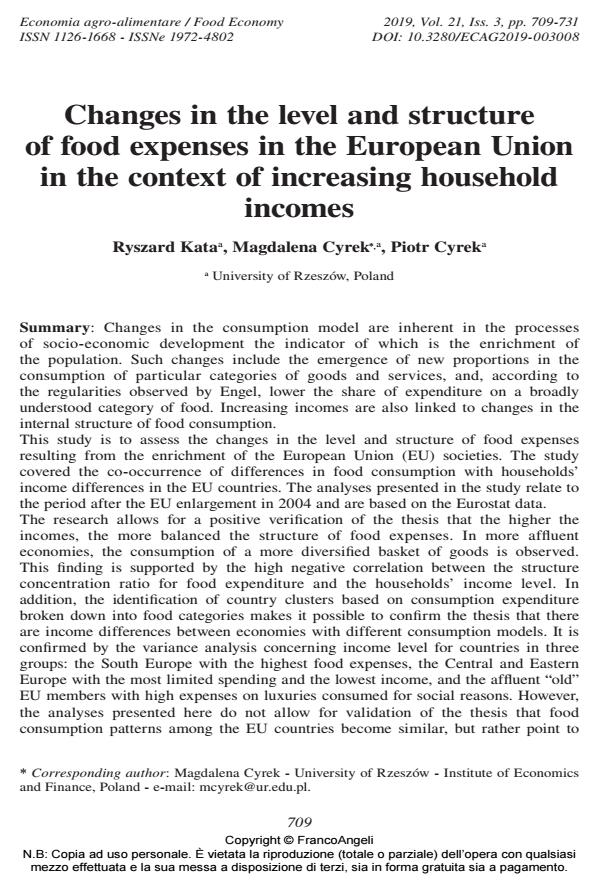 Changes in the consumption model are inherent in the processes of socio-economic development the indicator of which is the enrichment of the population. Such changes include the emergence of new proportions in the consumption of particular categories of goods and services, and, according to the regularities observed by Engel, lower the share of expenditure on a broadly understood category of food. Increasing incomes are also linked to changes in the internal structure of food consumption. This study is to assess the changes in the level and structure of food expenses resulting from the enrichment of the European Union (EU) societies. The study covered the co-occurrence of differences in food consumption with households’ income differences in the EU countries. The analyses presented in the study relate to the period after the EU enlargement in 2004 and are based on the Eurostat data. The research allows for a positive verification of the thesis that the higher the incomes, the more balanced the structure of food expenses. In more affluent economies, the consumption of a more diversified basket of goods is observed. This finding is supported by the high negative correlation between the structure concentration ratio for food expenditure and the households’ income level. In addition, the identification of country clusters based on consumption expenditure broken down into food categories makes it possible to confirm the thesis that there are income differences between economies with different consumption models. It is confirmed by the variance analysis concerning income level for countries in three groups: the South Europe with the highest food expenses, the Central and Eastern Europe with the most limited spending and the lowest income, and the affluent "old" EU members with high expenses on luxuries consumed for social reasons. However, the analyses presented here do not allow for validation of the thesis that food consumption patterns among the EU countries become similar, but rather point to the predominance of the consumption divergence processes, which occur despite the declining income differences. This claim is based on the observation of increasing average Euclidian distance between food expenses in the EU countries in 2005 and 2015. Nevertheless, some signs of shift towards Mediterranean consumption patterns may be found for many societies.