What can be learned from the French partial nuclear shutdown of 2016? 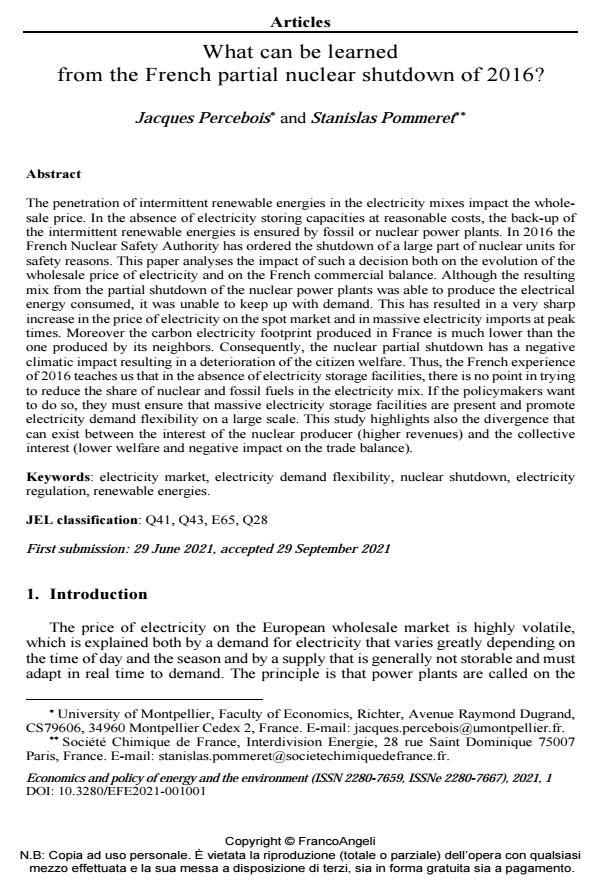 The penetration of intermittent renewable energies in the electricity mixes impact the wholesale price. In the absence of electricity storing capacities at reasonable costs, the back-up of the intermittent renewable energies is ensured by fossil or nuclear power plants. In 2016 the French Nuclear Safety Authority has ordered the shutdown of a large part of nuclear units for safety reasons. This paper analyses the impact of such a decision both on the evolution of the whole-sale price of electricity and on the French commercial balance. Although the resulting mix from the partial shutdown of the nuclear power plants was able to produce the electrical energy consumed, it was unable to keep up with demand. This has resulted in a very sharp increase in the price of electricity on the spot market and in massive electricity imports at peak times. Moreover the carbon electricity footprint produced in France is much lower than the one pro-duced by its neighbors. Consequently, the nuclear partial shutdown has a negative climatic impact resulting in a deterioration of the citizen welfare. Thus, the French experience of 2016 teaches us that in the absence of electricity storage facilities, there is no point in trying to re-duce the share of nuclear and fossil fuels in the electricity mix. If the policymakers want to do so, they must ensure that massive electricity storage facilities are present and promote electrici-ty demand flexibility on a large scale. This study highlights also the divergence that can exist between the interest of the nuclear producer (higher revenues) and the collective interest (lower welfare and negative impact on the trade balance).